In mid-April, our five-man crew set out with camping gear, cameras, and Axial rigs for a real scale adventure! Our destination was Moab, Utah — or rather, the Dewey Bridge Campground located about 40 minutes northeast of Moab. This also happens to be the entrance to the world-famous Top of the World Trail as well as the Dome Plateau Trail.

Videographer Robert Bauer and I left from San Bernardino, California, for the 11-hour trek. Paul Russel Jr. of Fault Line Crawlers met us off the I-15 so we could avoid the extra miles to his home near Palmdale. We picked up photographer Ben Wolosyzn at Las Vegas International Airport. He’d flown out from Champaign, Illinois, to join the crew. We filled our tanks, stomachs, and Canyon Cooler ice chest in Hurricane, Utah, where Axial product developer Randall Davis was supposed to join us. But he’d gone ahead without us, on a mission to be first to the campground.

Utah is beautiful, no doubt about it. When we arrived at the campground around 6:00 p.m., however, the temperature was only 35°F, the wind was blowing at 25 to 30 mph, and the forecast called for rain and possibly SNOW! We hurried to unpack the van and set up our tents before nightfall.


Let me tell you, this was no simple task. The others had less trouble with their little tents and chosen locations, but Paul and I had a large, 12-person tent (later dubbed the “Taj-ma-Paul”) which required all hands on deck. Not five minutes after we’d gotten the last anchor in, the whole tent came up, breaking several supports and nearly blowing away. We quickly moved it to a less desirable spot near a bush and tied it to the foliage for a more secure anchor. The ground here was quite soft.

With another long day ahead, we were glad to settle in for the night. Unfortunately, the forecast proved right. Gale force winds whipped our tents and shook us awake. I just laughed out loud. No way could anyone sleep through this! Then the rain came. Although our tent had a rain cover, the wind still blew it in through tiny screens on the side. Yet despite the wind, the rain, and the chilling, now 24°F temperature, we somehow managed to get back to sleep.

Morning came all too soon. The rain had stopped, but not the wind. Robert got the worst of it. His canopy came loose during the night, and he was completely soaked. Luckily his sleeping bag kept him warm, but he had some drying time ahead. Our adventure was off to a spectacular start!

Paul Russel got us back on track with hot coffee, while several cows and calves trailing on the other side of the Colorado River provided some morning entertainment. You don’t see that every day where we come from!

Given the weather conditions, we decided to take advantage of Randall’s Jeep and the nearby Top of the World Jeep-rated trail to make today about 1:1. Robert, Ben, Paul, and Randall took to the trail. I stayed behind to get our camp in order, collect some cool “B-roll” video footage, and ponder how to approach the 1:10 trail for tomorrow’s shoot…weather permitting.


As I sat there, I noticed a great spot for a trail across the river that was worth a closer look. Before long I was seeing nature’s beauty everywhere. A flock of Canadian geese flew overhead. Two geese had a nest on a small island in the river. The surrounding cliffs and plateaus revealed incredible shapes and coloration. It was absolutely inspiring.

When the others returned from Top of the World, they were eager to discuss what they’d seen and the fun they had. I listened — quite jealously, I might add. They described several areas that would make cool settings for our Night Crawl.

After lunch, Randall and I hopped into his Jeep so he could give me a “consolation drive” across the river. We followed Kokopelli’s Trail a short way, then got out and walked for a bit. It was a perfect location for tomorrow’s RC rock crawling trail. We shared the news with our crew back at camp and started prepping our rigs, gathering our filming equipment, and planning the rest of our trip.

Then it was time for a little crawling. A path just outside of our camp headed under the highway and off to the Old Dewey Bridge, into an area filled with history and neat spots to explore. Along the way we ran into some 1:1 guys who were very impressed by our little rigs. We also exchanged pleasantries with a bunch of cows. Turns out this whole area is open range. The cattle we spotted earlier across the river now made more sense.


Back at camp, we ate and recharged for our Night Crawl. Then, about an hour before sunset, it was time to get moving again. After all, we were about to set out on an unfamiliar trail at night. True adventure here, people — life on the edge!


And the guys were right. Some great little trails were scattered throughout the area. My new Early Bronco SCX10™ III had a whole array of Pro-Line® light bars and SCX10 III rock pods, so the trail ahead was well-lit and very fun. As we returned to camp, we realized that the weather had improved tremendously. Tonight, we were going to get a good night’s sleep.


Day two arrived. Time for the scale adventure we came for! Paul fueled us up for the expedition ahead with sausage, eggs, and coffee. Randall and I finished prepping the brand new, fresh out-of-the-box SCX10 III Base Camps that he, Paul, and I would be driving. We moved the front bumper out to the furthest position — the only adjustment we made to the rigs — and dropped in a 3S 2200 battery. Ready for the trail!

Ben and Robert gathered their filming and photography gear and then we were off. It wasn’t far to go from camp but definitely exciting. We were about to break ground on a new trail with a great crew in an awesome location. And awesome it was!


We found the end of a washout, started there, and took it all the way up to a large, domed rock area — crazy steep, but the perfect angle for our crawlers to climb. Further on, we arrived at a spot with an insane echo that carried throughout the canyon. We decided to cut off a bit of the trail by following a cattle path, probably the same one we saw cows using the day before. If we’d extended the trail a bit longer, I think we could have stayed up nearly the entire perimeter of the valley. We were able to circle all the way around and end up almost exactly where we’d begun. I highly recommend checking out this trail if you’re ever in the area.


After about three hours, we headed back to camp to freshen up and talk about our trail adventure — how beautiful the scenery was, how great the Base Camps were to drive, and how much fun we had. Then we decided to go into town and check out the Moab 4x4 Expo.

The scenery to Moab from Dewey Bridge and along the Colorado River was breathtaking. We’d definitely have to return here for more crawling and maybe even a new product video shoot. We hit town around lunchtime and had a really good green chile melt at the Moab Diner before continuing on a leisurely drive. It was the middle of Easter Jeep Safari, so there was PLENTY to look at!

We arrived at the Moab 4x4 Expo and said hi to some friends. Faith Dumont and their team did an amazing job with this event! A huge shoutout also to Bombtown Crawlers and the crew for running the Axial Try Me track. I crawled the course and had a great time. So did a bunch of other people who’d never driven an RC car before. We saw some amazing 1:1 rigs here, too.

After the show we visited a few local shops including Moab Momento, which had the widest selection of souvenirs and best prices. We became raving fans of their store, generosity, and kindness. If you ever stop by, tell them the Axial RC guys sent you! We also had pizza at Zax restaurant, topping off a great day of crawling with an evening on the town. Back at camp we wanted a campfire, but the wind was too high. And it was already getting late, so we just called it a night.

The next morning, we were anxious to get back to the location we found on our way to Moab to crawl and take more videos and photos. Before setting out, we enjoyed another awesome breakfast and coffee courtesy of Paul. He never missed a beat!

Given the beautiful nature of our surroundings, we decided we should first take advantage of the location to do a video shoot for one of our new Axial products scheduled for release in late October, 2022. Needless to say, we were able to get some amazing footage. But the most amazing part of the morning was when we were met by a raving fan who noticed our Axial van, got out his own Axial crawler, and headed over to say hi! Josh, it was great to meet you!

On the road again, we noticed a place called the Bronco Off-Rodeo. Of course, we had to check that out. We got a few photos of the Axial SCX24™ Bronco next to the 1:1 version and then were on our way, arriving at a cool location just off Highway 128 and close to the Arches entrance.

We were now standing at the top of a plateau with amazing crevices that made for some very interesting crawling. As we got closer to the edge of the cliff, the sheer magnitude of the canyon before us was a bit shocking. We just stood there for a while, soaking it all in. Then it was back to work, shooting a new product before enjoying one last night by the campfire.


Sitting around the campfire that night was bittersweet. Though it was sad to see such an exciting time come to an end, we were also looking forward to the journey home. But we were taking with us some great memories of an epic adventure with awesome people and amazing RC crawling. Thankfully, those will last forever.


Follow @AxialAdventure on Social media and be sure to post your #myAxialAdventure post! We can wait to see where you go and what you do on your adventure! 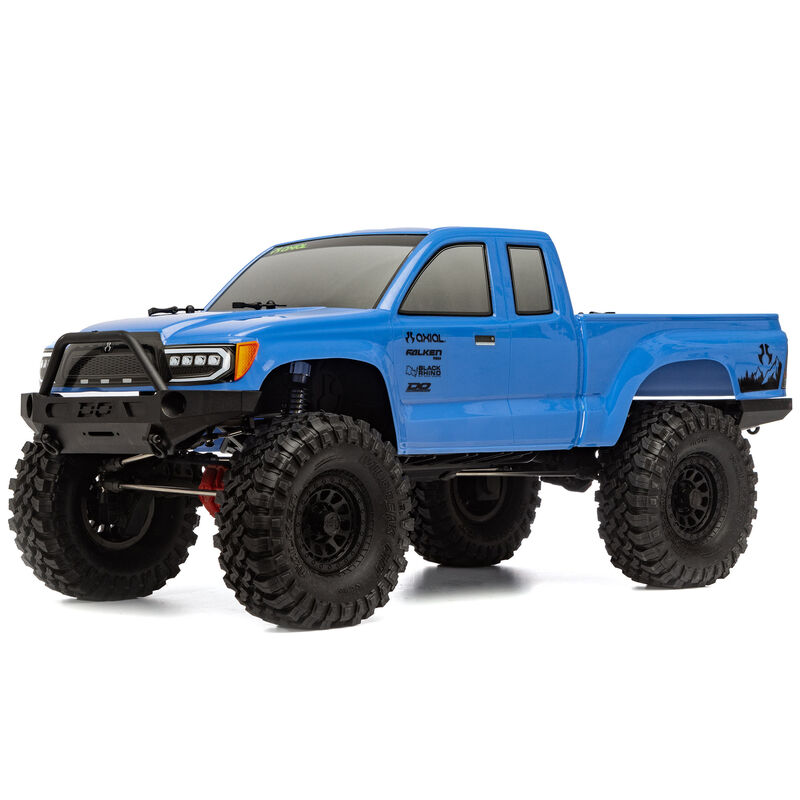 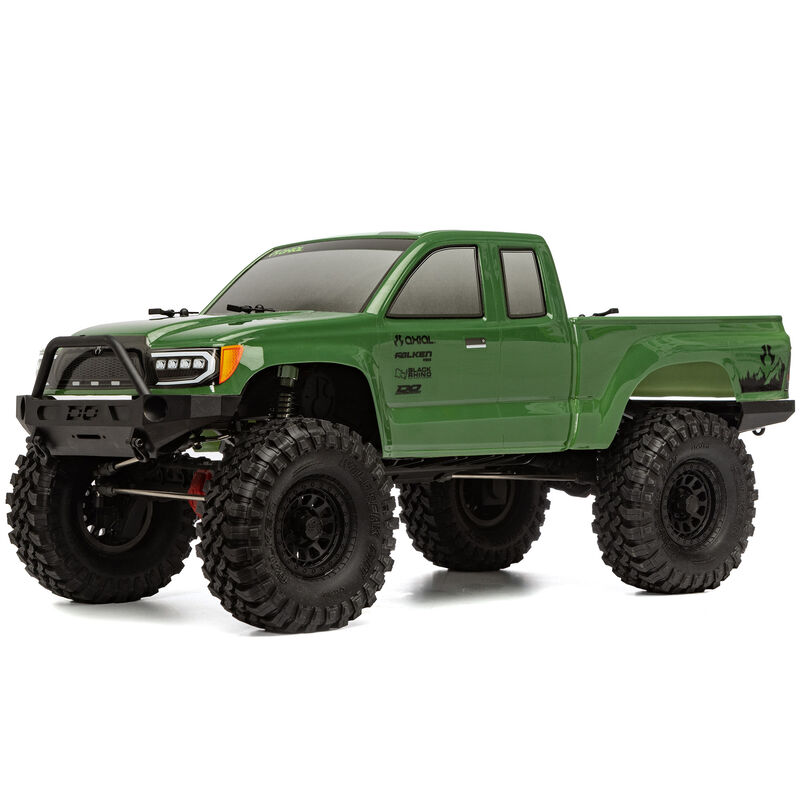 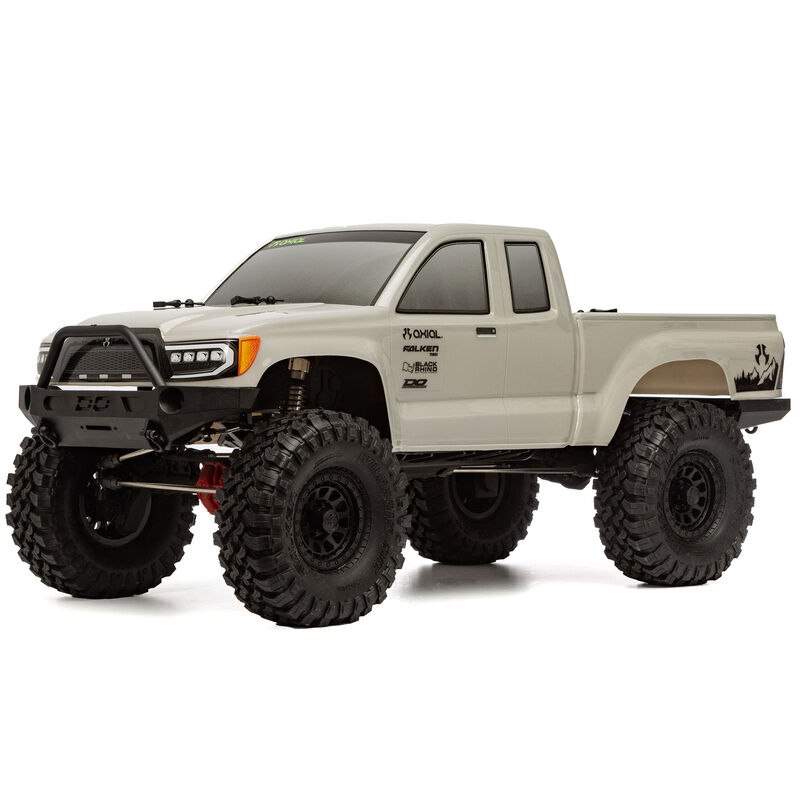